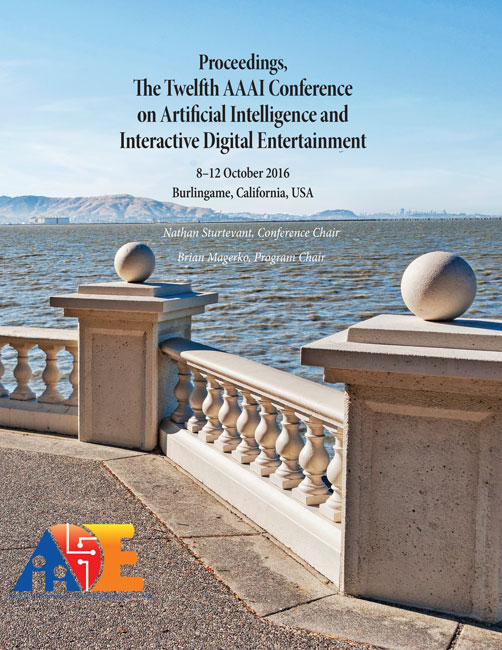 The Twelfth Annual AAAI Conference on Artificial Intelligence and Interactive Digital Entertainment (AIIDE-16) was held at the Embassy Suites by Hilton San Francisco Airport - Waterfront in Burlingame, California, USA from October 8-12, 2016. Interactive digital media forms, such as games, are an important part of our society. Beyond entertainment, interactive and collaborative digital media creates social bonds between people by providing a shared reality for people separated in time and space. Interactive media is increasingly used in education and in ameliorating the cognitive and physical health of the players. Collaborative media interactions can incentivize crowds of players to solve difficult problems, and researchers now leverage virtual worlds to serve as a research laboratory for understanding human behavior.

With the increasing amount of data available on human behavior within these systems we have an opportunity to create rich models of various aspects of behavior, such as emotion, skill, and social pref- erences. Generative algorithms have the capability to open up novel design spaces of interaction. This field opens up significant new challenges for AI systems in their quest to achieve human-level intelli- gence. Artificial intelligence in the context of human entertainment reveals difficult challenges for researchers and developers that are not found in other application domains. These challenges include creating believable opponents and companions; interactive storytelling; procedural content generation; player modeling and game analytics; path planning; and developing tools and representa- tions that empower designers to bring their visions to life.